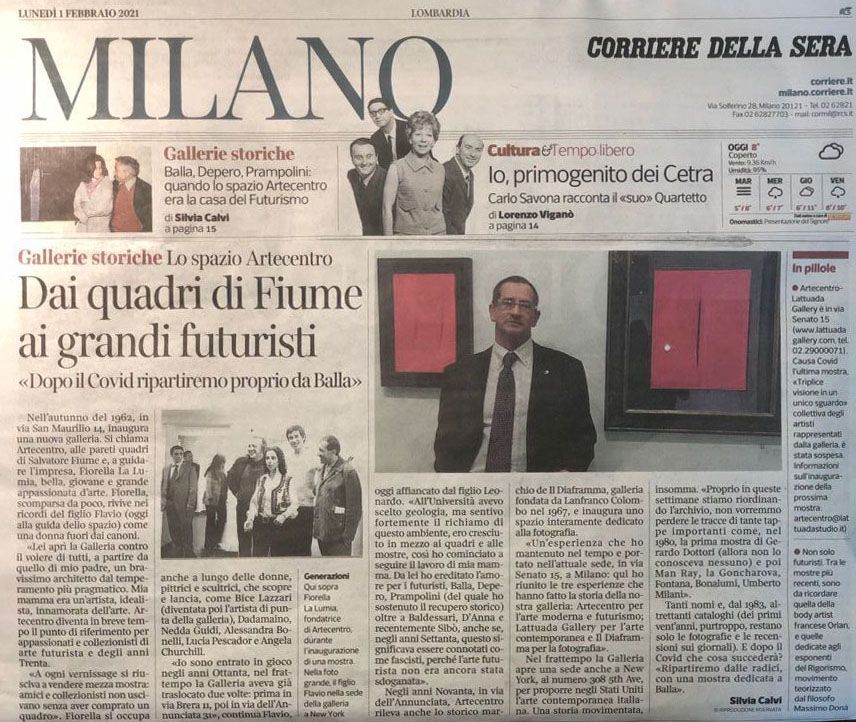 In the autumn of 1962, in via San Maurillo 14, a new gallery opens. Her name is Artecentro, on the walls paintings by Salvatore Fiume and, leading the company, Fiorella La Lumia, beautiful, young and a great lover of art. Fiorella, who recently passed away, relives in the memories of her son Flavio (today at the helm of the space and, since 1991, founder of Lattuada Studio, a contemporary art gallery), as a woman who is definitely out of the ordinary. «You opened the Gallery against everyone's will, starting with that of my father, an architect with a pragmatic temperament. An example? He had designed two houses for Lucio Fontana, but when he wanted to pay him with one of his canvases (and they were already worth a lot) he preferred a bank transfer. My mother, on the other hand, was an artist, an idealist, in love with art. Artecentro quickly became the reference point for fans and collectors of Futurist and Thirties art. "At each vernissage it was possible to sell half an exhibition: friends and collectors did not go out without having bought a painting". Fiorella also works for a long time with women, painters and sculptors, whom she discovers and launches, such as Bice Lazzari (who later became the leading artist of the gallery), Dadamaino, Nedda Guidi, Alessandra Bonelli, Lucia Pescador and Angela Churchill. "I came into play in the Eighties, in the meantime the gallery had already moved twice: first to via Brera 11, then to via dell'Annunciata 31" continues Flavio, now supported by his son Leonardo. "I had studied geology, but in I actually felt the call of this environment, I had grown up in the midst of paintings and exhibitions, so I began to follow my mother's work. From her I inherited the love for the futurists, Balla, Depero, Prampolini (whose historical recovery I supported, as well as Baldessari, D'Anna and recently Sibò) even if, in the seventies this meant being connoted as fascists: the Futurist art had not yet been cleared through customs ».
In via dell'Annunciata Flavio also inaugurates the first space entirely dedicated to photography with Il Diaframma, founded by Lanfranco Colombo in 1967 "An experience that I have maintained over time and brought to the current location, in via Senato 15, in Milan: here I brought together the three experiences that have made the history of our gallery: Artecentro, modern art and futurism, Lattuada Gallery, contemporary art and Il Diaframma photography ». Meanwhile the gallery opens in New York, from 2014 at number 308 5th Ave, to offer contemporary Italian art. An eventful story, in short. "In recent weeks we are rearranging the archive, we would not want to lose track of the many important stages such as - in 1980 - the first exhibition by Gerardo Dottori (then nobody knew him) and then Man Ray, Goncharova, Fontana, Bonalumi, Umberto Milani ». Many names and - since 1983 - as many catalogs (from the first 20 years, unfortunately, only the photographs and reviews in the newspapers remain) up to the most recent exhibitions of the French Orlan, with the photo-testimony of the facial plastic interventions she underwent to transform his body into a work of art, or the creation of RIGORISM, a movement theorized by the philosopher Massimo Donà, which includes Italian artists who work on monochrome, on volumes in space and on extroflection, most recently the master Nando Stevoli . And, after Covid? «We will start again from the roots, with an exhibition dedicated to Balla».