BICE LAZZARI: THE LADY OF ABSTRACT 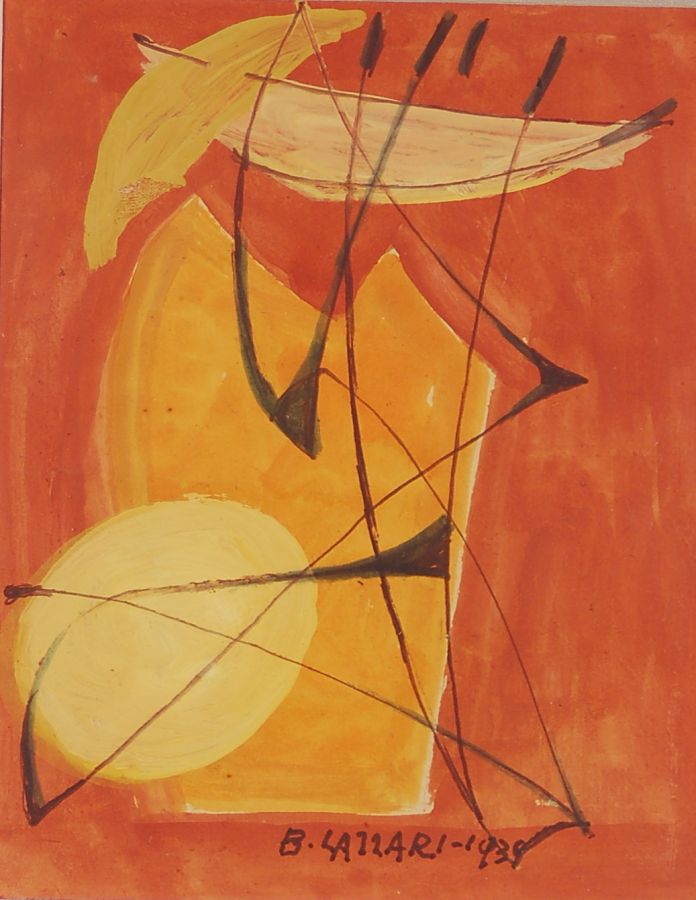 An isolated and solitary figure, Bice Lazzari, who was born in Venice in 1900, began from the study of the sign to arrive, in the years after the Second World War, in informal and material painting. His works give life to an abstraction tinged with poetry, but never far from its own structural questioning, to an informal surge that also had its own material moment up to a more complex and rarefied abstraction. After moving to Rome in 1935, the artist creates decorative panels in collaboration with architects and finally arrives, in the 1950s, in a type of production that can be placed in a material and informal context. Bice Lazzari creates a way of using completely personal materials, perpetually poised between the lyricism of the sign and the more concrete demands of the material. Bice Lazzari developed artistic research capable of reconciling a large number of partially antithetical themes:
order-disorder, form-shapeless, organic-inorganic, drawing-matter, comic-tragic, elaborating a variegated color that extends to the surface, and at the same time hints at different levels of depth. Bice Lazzari, however, never had a total adherence even to abstract art, although his art markedly made use of the compositional principles of this artistic current, he was, however, always fascinated by a certain type of figuration which, alongside the absolute compositional freedom determined a dualistic research which served her to develop a completely personal poetics that consisted in amalgamating the results of a purely lyrical research but linked to the theories of perception, to the results of a compositional freedom that gave life to a mysterious, charged reality of anguish and contradictions. The work of Bice Lazzari, therefore, becomes a real testimony on the human condition, but it is a question of making visible an image created through beams and combinations of horizontal and vertical lines, circumferences, traces, materials, spaces, signs,and other motifs derived from a process of pure creation and which for the artist constituted a real connection between the spirituality of thought and visual creation. His painting is linked to the real but to a real that is transformed; things, the world of things, by association, determine a new form.
Bice Lazzari seems to receive the visible from the outside and transmits the invisible from his works. Moreover, in the paintings of Bice Lazzari, like those of other abstractionists, it is often recognizable a cue taken from external reality, seen under the microscope instead of with the naked eye according to our daily habit. However, Bice Lazzari's painting is refined, intellectual, rarefied; often allusive and symbolic, evocative, suggestive. From his studies derives the importance of the line: the sign that is articulated and coordinated with other signs creates the poetic motif that is indissolubly joined to the color and thus, Bice Lazzari "the great lady of abstraction" in 1959, had the period of oil painting due to severe poisoning. And so year after year he will explore the passage and transformation from the "extraordinary artistic standard" to the "normal exception", Bice Lazzari's "heretical" horizon is expressed by the search for new values , actually expresses the downsizing of the concept of standards as the basis of normality, to relaunch new points of view, in the direction of a permanent experimentation that avoids provocation and transgression, to transform normality into a path of exception. In particular, in the world of abstraction the filter of personal sensitivity becomes a powerful interpretative key of reality: a
a sort of submerged revolution, not sought and unwanted, which opens the way to new experimental forms of painting, as well as relationships and coexistence, which define a heretical horizon. BICE LAZZARI, an artist recognized as the most important woman of Italian abstractionism, despite the distracted silence that has surrounded her in recent years.