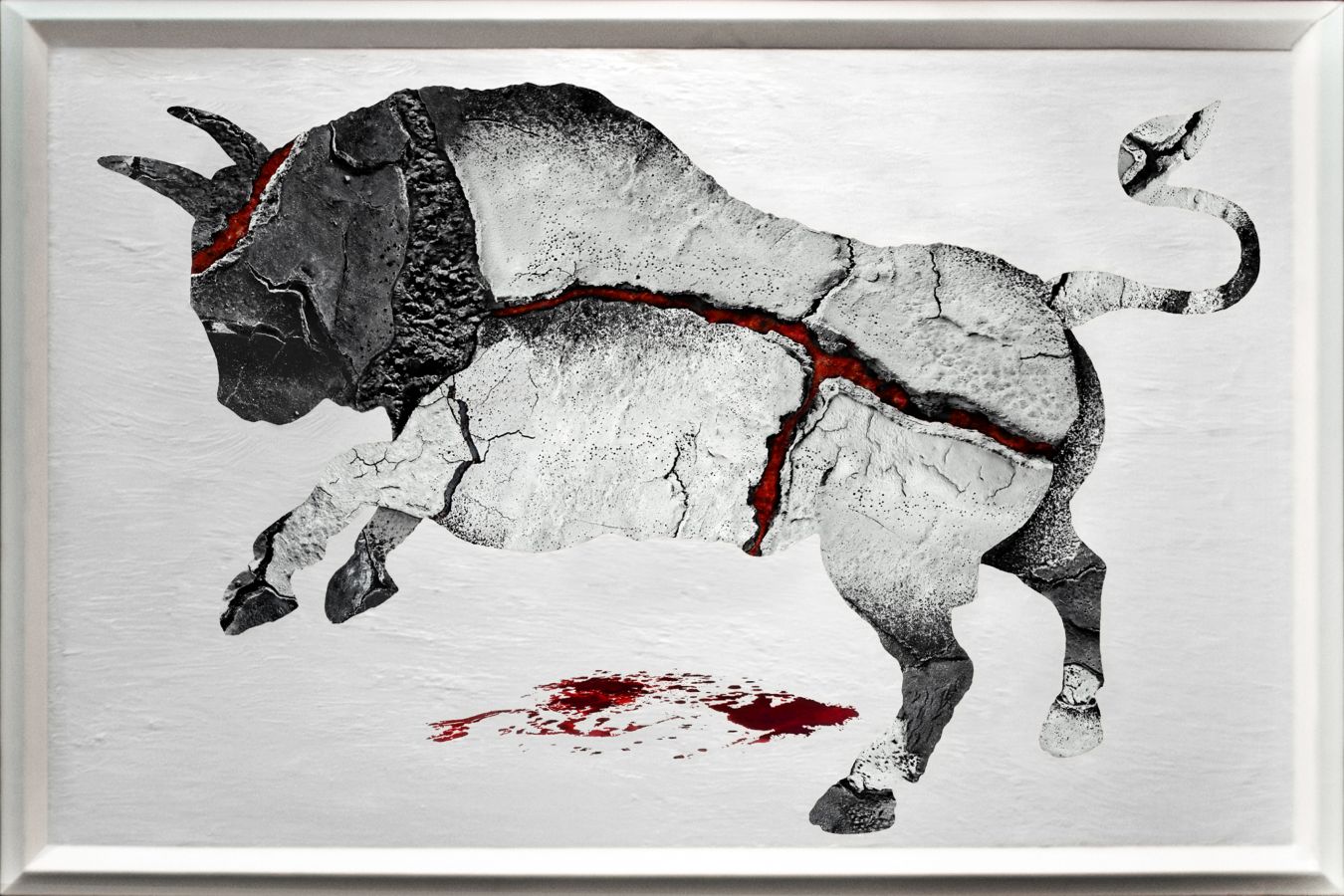 nd here the observer’s gaze shifts to the majestic olive tree trunks that during one of her travels, Anna Maria decided to eternalize: ancient, with bark marked as old leather or wrinkled skin, struck by the vibrant plasma of lightning bolt, a pure mysterious energy arrived from Above according to unfathomable projects, a living and true expression of those Cosmic Forces in front of which already the Gothic Literature of a Byron and the Romantic Art of a Friedrich trembled for their Unpredictable Eternity, killed in their vegetative cycle perhaps in a night of serenity or storm not too strong, imposing in their dead fixity, these trees remind us of those prehistoric animals extinct long time ago, which gave birth to the legends of dragons and knights. The Olive Tree.
Athena’s plant. The plant of the Virgin and Warrior Goddess who is also Patroness of Arts and Wisdom, Wisdom within the twisted folds of wood, like ancestral wrinkles of Human History.
Here too, a contradiction comes into play: evergreen trees sacred to a goddess of life and historical cosmic cycles, carry death on themselves. It is the Quantum Entanglement that we have seen above, where two equal and opposite particles that are millions of light years away, meet, tangle, merge, and generate a Third that has the characteristics of both. Thus, the Universe is born and Balance is born. In this sense, our little pomegranate seed that hides a Secret, a huge Mystery, is in danger, and must be protected: here is the gentle and tremendous invitation of the Artist to his audience - the invitation to think to Life as something so tiny, fragile, and sacred, that it must be preserved and protected in its natural becoming, from beginning to end, without wanting to impose any bond on a Cycle which, in its Immortality, is neverending and always the same from the Night of Times.
We are still in the world of fairy tales, where children must defend themselves and be defended against wolves and orcs - the World of Terezin-, and the Elders must be gently preserved before detachment; we are therefore faced with the bad relationship that this society has with both Life and Death: fearing them both as Manifestations of those Very High and Mysterious Cosmic Forces that in the past went under the name of Gods, here is that modern society does not respect them, and therefore the modernity lives in disharmony and in a disharmonious way in front of what is most simple, natural, beautiful, ancient, and also right. It takes a dose of Wisdom that goes beyond the relief of the Soul that flies once freed from the earthly bonds, as seen in the Winged Woman with open arms of Anna Maria, coming from Belfast, in front of the Titanic Museum: also this refers to Persephone in its free and spring phase, the Life in Bloom phase- it takes the Silent, Wise and Patient Waiting for those High, Alien Figures, which represent the Four Cosmic Forces of Nature - Air, Fire, Water, Earth .
They are among the Stars - Anna