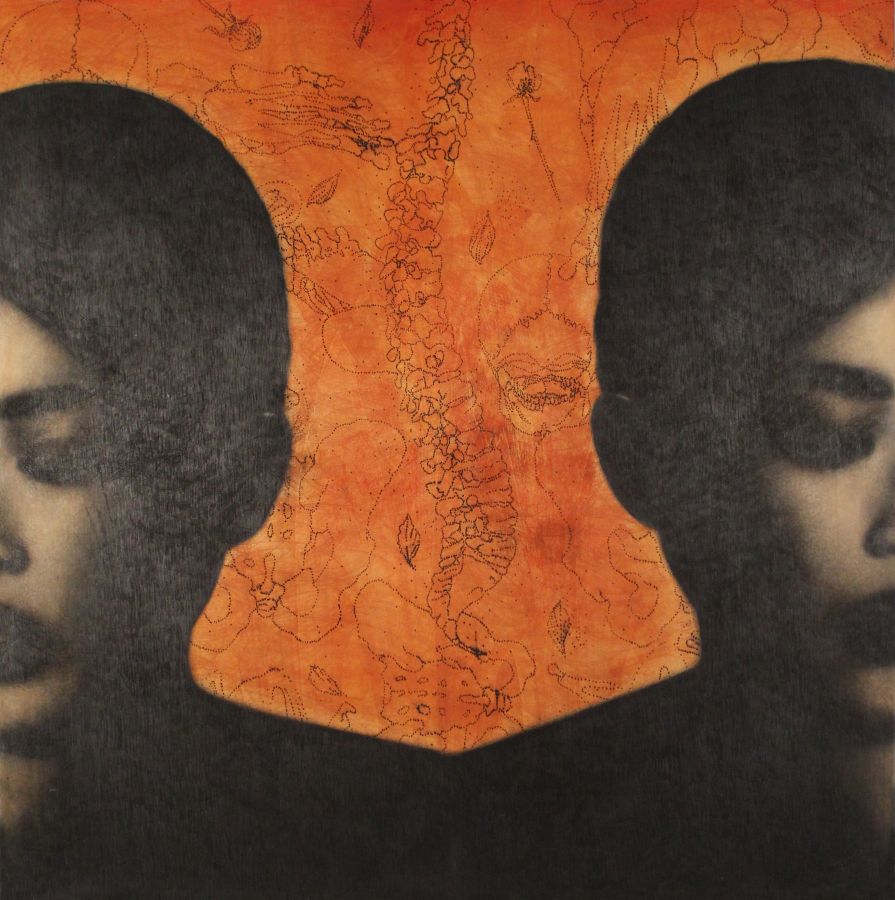 The most valuable definition of Diaphaneity, embraces a precious, unearthly delicacy, mostly associated to an alabaster transparency: fragililty,

slimness, are the synonyms which go in parallel with the description of this ethereal state who puts the Artwork in a world linked to the

Certainly, this is what we think when we talk of ‘ leonardian evanessence’ in relation to the graceful heads of angels and madonnas the vast

production in pencil and ‘ biacca’ of the ‘ Magister’ of Vinci has rendered us: without the technique of the soft dissolution of the paintings,

obtained through the use of fingers or with a piece of cloth or, in the end of the execution, with a slight and homogeneous veiling of colour in

the binder with the meaning of softening the features of the faces, it wouldn’t be possible to give to the observer the dreaming chimeric effect

It is an immense work: but we were in the XVIth Century, and thinking of fixing the Spirit on paper or canvas, was still possible. Closed that

Season of the Beautiful Drawing, the Beautiful Line, of the ‘ Beau Geste’ after centuries of sublime pictorial technique, the XXth Century has

projected us in the Abstract Art: first of all, the Christ figure dissolved from the chosen themes, and from then on, saints, madonnas, angels, till

arriving to men, have given up their places to the most total absence of line, of silhouette.

A catastrophe for what in Italy was called ‘ La Bella Maniera’ ( The Beautiful Way ): since then on, it remained orphan, assisting to the inevitable

decline of the Figurative Art in its whole, even in Nature and in the Landscapes.

For this reason, it is with great emotion that this exhibition, with the entire ‘ Opus Magna’ of Omar Galliani, is cherished and acclaimed by the

person who is writing: it was since 1500 we couldn’t see anymore the angelic line realized with the leonardian evanessence, and that this event

is happening in the anniversary of the 500 years of the death of the Genius of Vinci, is to us quite a Sign.

Art is passing through a phase of acute crisis, in which the dominant rules after Fontana, or after Warhol ( ‘ Art is Businness’, said the patron

of Studio 54, when he silk- screened in a serie his Marylins, or his Edie Sedwicks ), entered in a descending trend: we think that public soon,

searching for a refugee far away from the economic crisis, will be happy to see again the Return to the ‘ Bella Maniera’ ( Beau Geste ), to the

Beautiful Apollonian, to the Veritable Art technique, realized without resorting in low- level oddities or artifices: then, the recovery of that

lesson which belonged to the Sublime Classic in Art, worked by Maestro Omar Galliani, will reward him even more than what the critic or the

Uffizi Galleries, which hosted a catalogue on him in 2018, could do.

In an epoch when the human figure, especially the perfected one, the classico ne, the ethereal one, disappeared, Galliani couldn’t be anything

else than part of the group of the Anacronists and of the Magic Primary, who refused to succumb to the new abstract dictats: if it’s true he has

learned well the principal lesson of the leonardian evanessence, working a lot with pencils and pastels, veiling the artworks with a satin touch

of Renaissance ‘ dulcedo’ ( tenderness ), it is equally true that the faces presented by Galliani are truly modern, the profiles are very different

from the beauties of the humanistic period, they are elegant faces with regular features, as we could see on the fashion photographs of magazines

like “ Vogue”; and the primary colour, even in blue, or even in red, is always present, giving us in this way the sensation the Magister

wants to return not only to the origins, but also to the essentiality.
A great quality, this one: trying to combine the ancient lesson of the Apollinean Beauty, with the evocative strenght of the primal colour and
the modern crude sign in contemporary women’s features, with ecstatic, dreamy expressions: mixing XVIth Century with XXIth Century, Galliani
tries a synthesis to bring back into vogue the Figure with all of its intensity through the lapis, a Figure trascending Time, but still immanent in
nowadays life.
About the pencil, it is one of the most simple, practical, economic instruments, so, essential, primal, and the sign in some works is left uncompleted,
left escaping plastically inside the shadow, as if the artist wants to give, with very few easy lines, the sense of all the composition:
Galliani absorbs not only the care of the leonardian veil and the softness of trait typical of Raffaello, the compositive tenderness of Perugino,
but he trie salso those asperities of Michelangelo’s ‘ Undefined’, well noted in sculptures the great father of the two Medici’s graves used to
leave uncompleted: let’s take in consideration the fleeting idea of the dyptic called ‘ Disegno Siamese’ ( Siamese Drawing ), pastels and pencil
on poplar wood- we have an unusual support, and a sort of speed in the silhouettes, a sure precision, the short lines which outline the hair, the
neck, the profile, without finishing it.
Whether the Master decides, as in ‘ Outremer’, to act in details, he is so much talented to transform his artworks in a quasi- photography in
black and white or in albumine, as we saw at the beginning of the XXth Century, in the poses of Félix Nadar; but when Galliani decides to be
extremely synthetic, even brutal, with very few unfinished sprays, gives totally to the spectator all the tension of a body, of a face, of a movement:
let’s see also in ‘ Nuovi Fiori’, where the composition is so delicate and minimal to seem painted on rice paper.
In Galliani we have even a symbolist lesson, as we can notice in certain artworks between immaginific stars in ‘ New Saints’: what should we
say about those of his angels, whom in their perfect blue ascension, has a single, sinful, stylized red wing, and they emerge from a background
without Light, enlightening with their presence all the scene, through their shadows and lights?
He is a penombrist more than a chiaroscural, it’s certain: but his angel- women have the innocence of the Renaissance canon, and the sassiness
of the contemporary fashion model we saw in an advertising of a perfum with a seductive and poisonous perfum.
Galliani is so: antique in modernity, innocence in sin, voluptuousness in calmness, schematicity in veiling, powerness in fragility, dream in the
shadow… It’s the Shadow in in The Water, the yin in the yang, the primal colour in the tender pastel, the Perfect, Poetic Duality of an artist who
knows how to unite what cannot stay together without a Touch of Art.