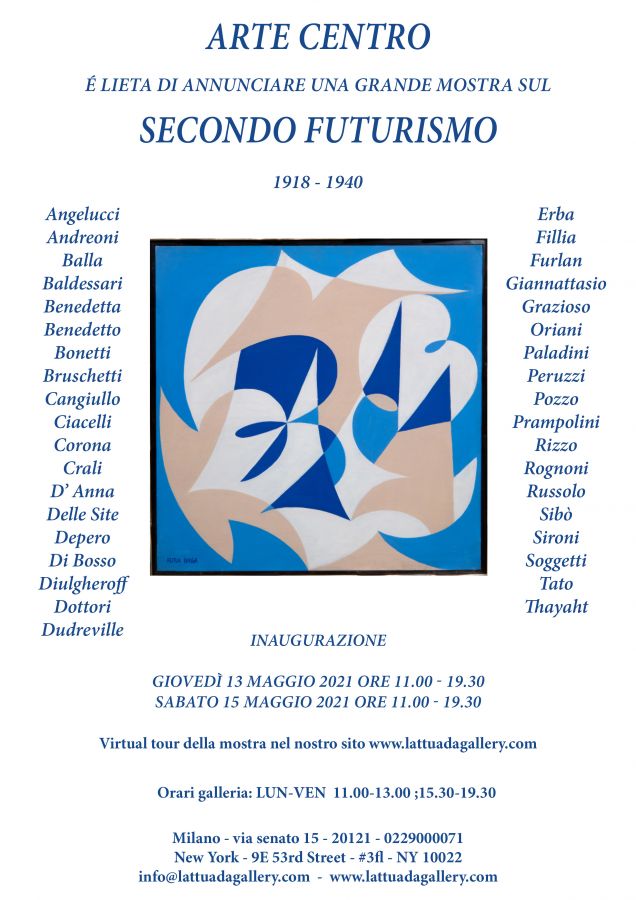 This very rich and comprehensive exhibition with more than one hundred works on the second futurism is a dedication to my mother, Fiorella La Lumia, a courageous woman in love with Art, who since the 60s began to make the historical recovery of the artists of the Second Futurism, when, still at the time, hosting a futurist exhibition meant being considered fascists. We began with large exhibitions and Enrico Prampolini, an eclectic Modenese, frequenter of Balla's studio, painter, sculptor, set designer, started contacts with all the European artistic avant-gardes from Dadaism to Bauhous; he met Picasso, Kandinsky, Jean Coctean. The very first exponent of the 2nd Futurism, like his multi-material paintings, cosmic landscapes, he was subsequently one of the main founders of the abstract geometric movement, from the 1950s concrete art (M.A.C.). In the following years we had one of the most complete exhibitions on Gerardo Dottori, including about one hundred works with the entire collection of Tancredi - Loreti from Perugia. In the following years, in addition to Depero and Romolo Romani, we made the historical recovery of Roberto Marcello Baldessari, a futurist from Trentino Region. Among the other exhibitions we have also exhibited the futurist scenographic works of the Milanese Baldessari. In the meantime we have organized four collective exhibitions on the Futurist masters. Lastly, in addition to a large exhibition by Giacomo Balla, which we will host again next year, we worked on the historical recovery of Sicilian futurist artists, in particular Giulio D'Anna and lastly, before this exhibition, the rediscovery of Pierluigi Bossi called Sibò . Let's say that we can consider the development of the 2nd Futurism from the 1920s to the 1940s. With the death of Umberto Boccioni and the simultaneous passage of Carrà and Severini to solutions close to Cubism, the Milanese group was dissolved and a new ferment transferred to Rome with the consequent birth of the 2nd Futurism. A group of artists gathered around Marinetti and signed the Aeropainting Manifesto in 1929.
Among the many adherents, we have also secondary artists and the participation of Prampolini, Depero, Cangiullo, Zatkova, Balla and many others. Then there was a second phase close to Surrealism, with cosmic and polymateiric landscapes, in particular the Turin group with Fillia, M.Rosso, N.Diulgheroff, Pippo Oriani and Farfa. To these were added Sironi, Soffici, Rosai, A.Martini, Achille Funi, R.M.Baldessari and many others. This exhibition will feature artists such as Andreoni, Angelucci, Dottori, Crali, Tato, D’Anna and Sibò. Of course this exhibition is not a perfect exhibition on the 2nd Futurism, but from an artistic and cultural point of view, with the presence of more than one hundred works, it can give a great vision of this movement, with the presence of many artists from various regional contexts.