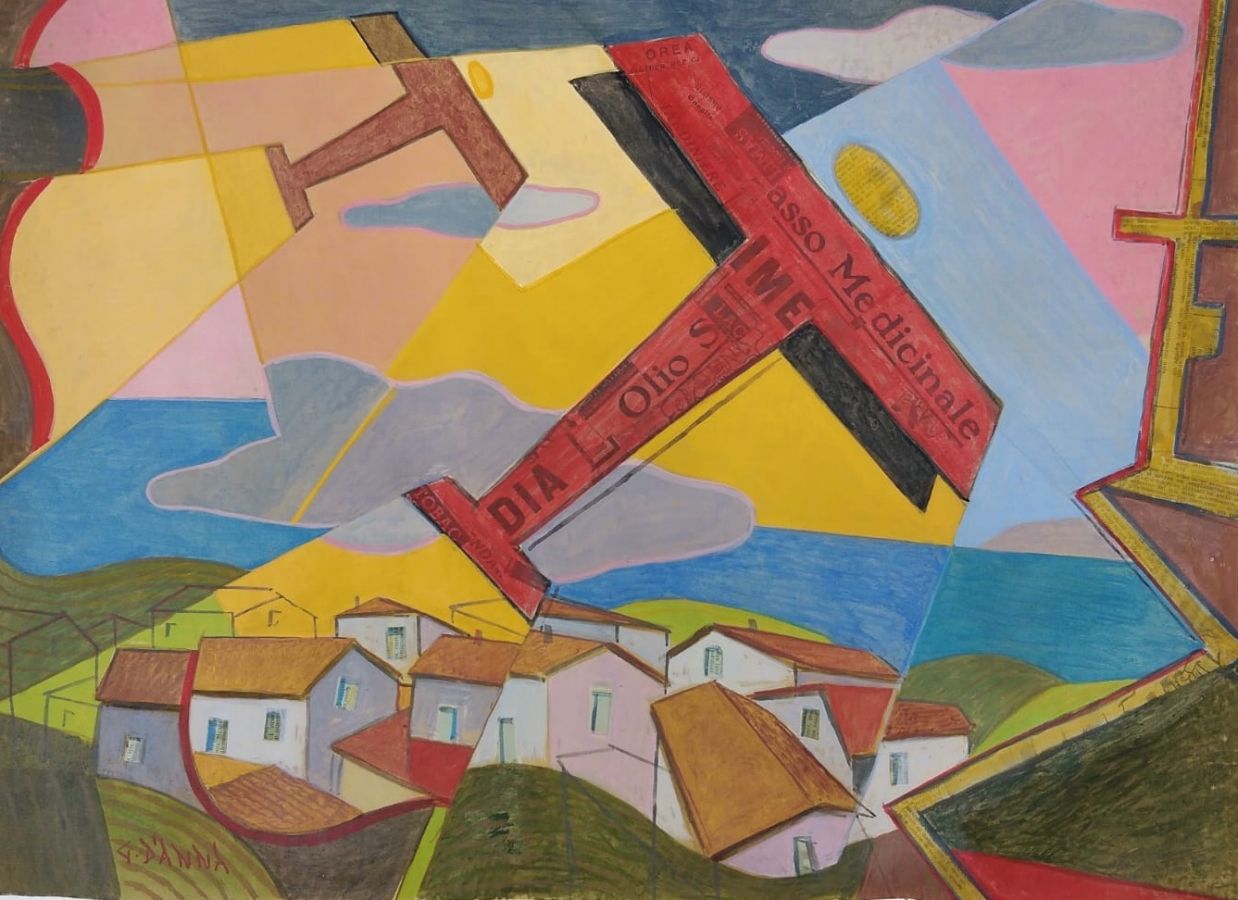 I was 10 years old and from the paintings we had at home, and in my child’s mind, I imagined to meet a bohemian, long hair and a beret on the head, beard and moustache.

Instead, when I entered with my father in D’ Anna bookshop in Viale San Martino in Messina, we met the old clerk of the library, Giovanni, who announced us to D’ Anna and a middle- aged gentleman came out of the black room, distinguished, with graying hair and glasses: everything that to me seemed less than ‘ the artist’ that I imagined.

He embraced my father and after the usual sentences between two old friends who had not seen each other for a long time, he invited us for a granite at Café Irrera, one of the most famous library cafés in Sicily, where all the intellectuals, poets, writerspainterswho frequented the D’ Anna bookstore or who were passing through Messina would meet.

My father told me that the exponents of the futurist group of Messina, poets, writers, etc, led by Guglielmo Jannelli, the intellectual and futurist writer, often meta t the Irrera Coffee House: F. T. Marinetti, Giacomo Balla and Fortunato Depero, invited many times on the island by G. Jannelli, frequented his place.

In the years to come I had the opportunity to return to the D’ Anna bookstore with both my uncle Tommaso, a musician and friend of D’ Anna since I was a child, and with my uncle Gaetano Carbone, who was very well known in Messina for founding the S.E.M. ( Siciliana Editrice Messina ).

With the passing of the years my interest in the story of D’ Anna and Futurism, especially that of Sicily, increased and in November 1979, a year after the death of D’ Anna, I organized in my gallery “ La Palma” in Syracuse, the first solo exhibition of D’ Anna, displaying works owned by my family.

The exhibition aroused much curiosity, especially for the aeropitture ( aerial paintings ).

Infact in the 80’s and 90’s Futurism was still considered a niche movement known by few people and treated only by a few dedicated galleries.

In particular, Sicilian Futurism was practically unknown and even writers and poets such De Maria, Cavicchioli, Cardile, Gerbino, and other Sicilians, despite having joined the first Futurist manifesto in 1909, were not mentioned in Art Historian texts concerning Futurism.15

Only thanks to a great art historian, Anna Maria Ruta from Palermo, the Sicilian Futurist avant- garde came to light and after 30 years of studies and research, exhibitions and books, today we can say that Sicilian Futurism has begun to be appreciated and known both in Italy and abroad.

In my own small way, I have made a contribution so that this historical period could be known by general public, creating an Historical Archive of Sicilian Futurism, organizing exhibitions in Italy and abroad, collaborating with Professor Anna Maria Ruta, on the realization of two monographs, one about Giulio D’ Anna and one about Pippo Rizzo.

In this exhibition we have chisen works that represent the journey of D’ Anna as a painter, during the key years on 1927 to 1935.

In the works painted before the Aeropittura manifesto, signed in 1931, D’ Anna created his own personal Aeropittura, greatly appreciated by Marinetti, which he based on news clippings and some references to the work of Mino Somenzi, creator of the Manifesto whom he met in 1927 in Reggio Calabria during the Biennale di Reggio.

Infact, in the works painted after 1931, D’ Anna only partially aligned himself with the strict tenets of Aeropittura dictated by the Manifesto, contrary to his fellow painters ( Tato, Crali, etc. ) whose work greatly ressembled each other’s beacause they looked always at the already made as Marinetti has dictated.

D’ Anna, however, kept his own unmistakable style using collage as a pictorial language.