A PLACE OF FUTURISM: SICILY AND GIULIO D'ANNA 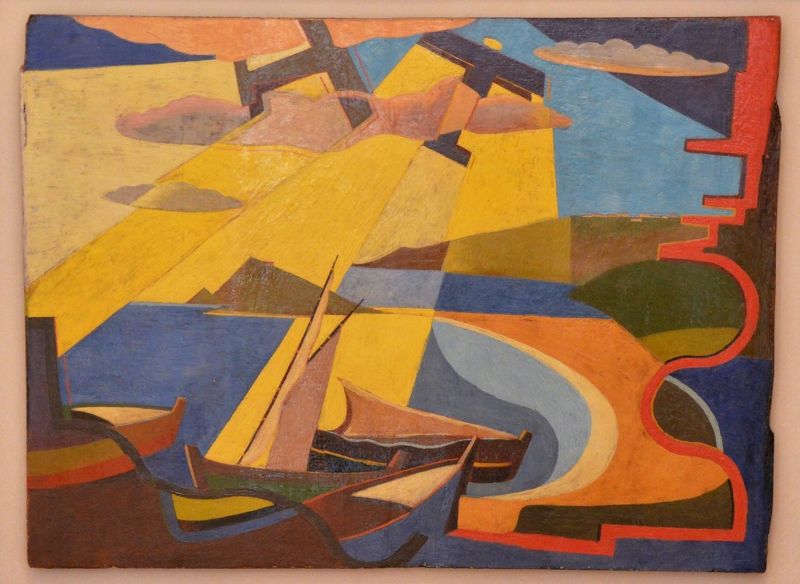 Futurism travels all over Sicily from Palermo to Catania, to Messina, to Trapani, to many marginalized towns, which are shaken by the impetuous wind of renewal, for about twenty years, not too late compared to national rhythms: from the fifteen years, in which the adolescent Vittorio Corona (1901-1960) begins to draw futuristically moved images inspired by flight, the forerunner of aeropainting, throughout the 1920s, until 1935-'36, years in which Giulio D'Anna (1908 -1978) gives a farewell to the futurist ways due to the influences exercised on his thought by his friends Renato Guttuso and Beniamino Ioppolo. The true capital of pictorial Futurism

of the Island is Palermo, while Messina is of the literary one, so that when we talk about the Sicilian Futurist Group we refer, by common convention, to Pippo Rizzo

even if by adoption, both because he is the youngest and therefore the one who later comes into contact with Marinetti, with Prampolini and his companions, just when the three of

Palermo are in fact emerging from Futurism, and of the Sicilians he is the only true aeropainter, indeed one of the most interesting of the Italian futurist aeropainting, much appreciated by Marinetti, who places him among the representatives of the synthetic documentary realist vein in the version of Aeropainting from 1935 and inaugurating two of his exhibitions in '31 and '33. D'Anna, however, crosses all four strands of aeropainting as a convinced futurist that he is, has Prampolini and Fillia as masters and has the taste for experimentation in his DNA: even when he abandons the movement, he never stops researching and experiment with a flexible pictorial cipher all the creative and technical possibilities that contemporary painting offers, especially in the post-war period, in the 1950s and 1960s, in which it even approaches Pop Art, Abstractionism, and again the new solutions of Polymaterial since he used in the Futurist phase.
His Mediterranean aeropainting, full of all the chromatic facets, which the sun, sea and hills of the Strait reveal before him and which his brush feeds on with lyrical spatial abandonments, typical of his sweet and serene nature. His is a sunny landscape, the poetry of the landscape, in which sea and land collide and in which red, yellow, green purple planes (purple is a symbol of dynamism and speed for Fillia) weave playful competitions, which reveal all the joyful fascination of infinity, which animates the changing perspective polidimensionality, with which the trajectories of the darting engines transfigure reality. The panoramas merge and open new directions, which are only fantasy, in an effervescent crackle of curves, undulations, straight lines. In take-offs, landings, low-flying flights, from above, trees, houses and hills take on miniaturistic dimensions in a coloristic kaleidoscope, which looks at the figural and chromatic lesson of Balla and Depero, but with an all-Mediterranean conjugation. Sometimes, even, in an attempt to simultaneously break down reality, abstractionism, thus appearing as the authentic Sicilian futurist, even if self-taught and even if his other traveling companions have not negligible creative, qualitative and pragmatic merits. in recent years many have made an effort to make his painting known and valued as it deserves, and this exhibition, in one of the capitals of Italian art, is one of the many occasions to do so.