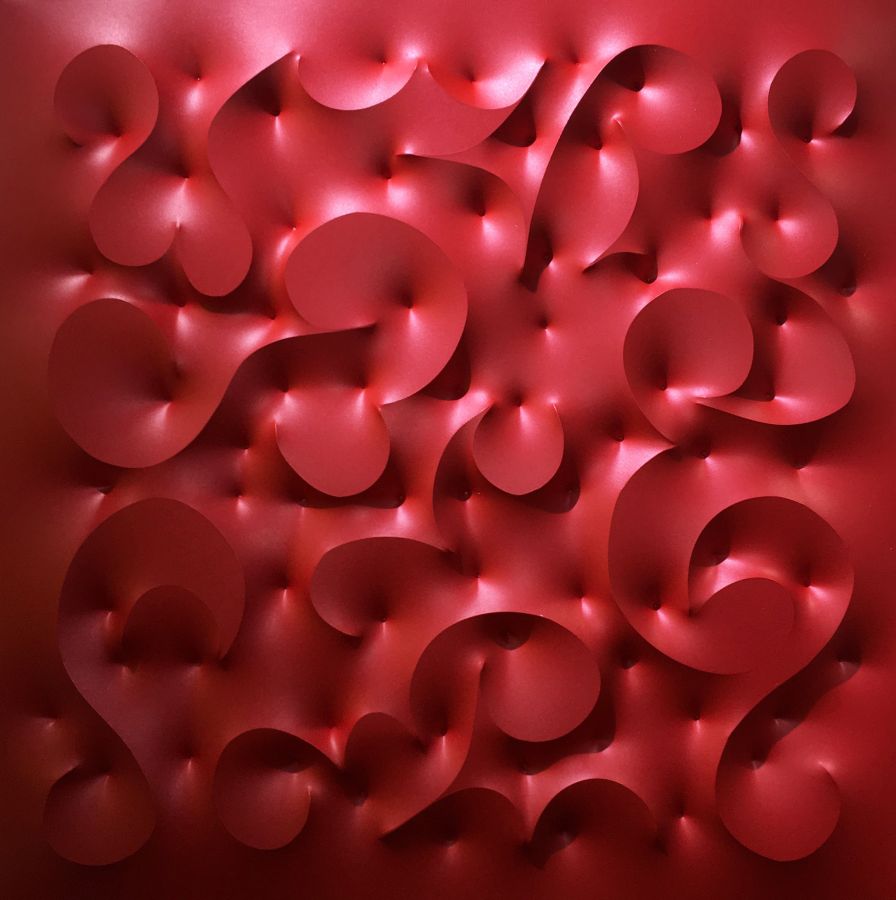 The “Force Lines” in the works of Amadio are the plastic expression of energy that is released by the collision
of tectonic plates.
Extroversion is the inevitable result of their union. The drama of creation is evident in a multidimensional
space where the quantum parameters are energy and time.
Time is crystallised in an interlude, Energy is so powerful that it is transmitted to the exterior and influences
minds. The works of Amadio, apparently detached and rational, are actually the synthesis of a remote conflict
between being and becoming, between matter and energy.
In his works, matter becomes energy and space folds over time in a waving struggle between the creation
and the creator. There is no good and evil, moral and injustice. In his works there is the creation of Earth and
the result of different forces that come together in such a powerful linearity to positively transfer that same
energy which forged them.
The broad force lines of the Earth are represented in accordance with the most ancient Druidic and pre-
Columbian philosophies. Extroversion thus becomes a decisive and necessary structure to depict and extol
the violence and drama of creation.
In an exciting theorem of forms in space and space that becomes form, his works are at the same time rigorous,
rigorist, but also romantic. Spatialism was only the starting point; the arrival point is much farther away.
From punching a hole in the canvas to looking for new dimensions beyond the surface, the Rigorism of
Amadio triumphs over the surface to release Energy. As Enceladus, Saturn’s Moon, which appears frozen on
the outside while fluid magma seethes inside, the works of Amadio, seemingly glacial and without pathos,
are actually teeming in rich biological life, a summary of every evolutionary process, not only amino acids
or proteins, but also living and thinking cells, rich in élan vital.
From Lucio Fontana, beyond Lucio Fontana: well beyond! towards the fusion with planet Earth in perfect
accordance with the theory of ecological respect for nature based on knowledge.
Aristotle thought that energy was a form of matter, Amadio moulds matter by giving it form and transforming
it into energy. It seems paradoxical to associate such a rigorist conceptual artist as Amadio with the very
symbol of the poetry of Goethe, but this association is useful in order to eliminate the generally widespread
belief that rationality is inadequate when it is an end in itself and to complete the examination of the artist’s
genius presenting it as complete art, where the brilliance of his expressive language is not just to please
himself, by swirling along a narcissistic and hedonistic spiral, but it is the result of a full-blown creative drama
that is violent and passionate together, expressed in a coherent and precise language.
Amadio’s ego does not prevail over the animus and Homo habilis is at the service of Homo sapiens sapiens.
If bright tracers cut through the universe with the orbiting planets and comets, on the neutral and monochrome
plane of Amadio’s works, lines sometimes seem to accompany and complete space, sometimes
they are a living and strong presences having the creative violence of genesis.
A druidic and ancestral artist, Amadio represents the slow flow of the cosmos and the force lines of the Earth,
he is an architect of space and sculptor of force, he is an inventor of revolutions and a scientist of energy.
... First space, then time, finally the storm and the urge: Sturm und Drang.