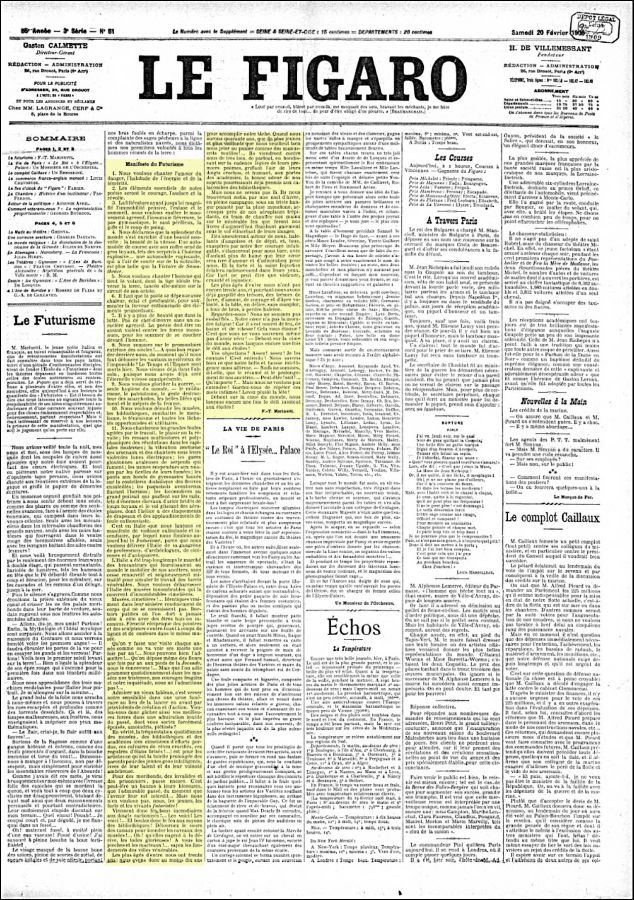 Italian artistic, cultural and musical movement of the early twentieth century, as well as the first European avant-garde, had influence on similar movements that developed in other countries of Europe (in particular in Russia and France), in the United States of America and in Asia. The Futurists explored all forms of expression, from painting to sculpture, literature (poetry and theater), music, architecture, dance, photography, cinema and even gastronomy.
The official name of the movement is due to the Italian poet Filippo Marinetti. Wars, the social transformation of peoples, great political changes and new technological and communication discoveries, such as the wireless telegraph, radio, airplanes and the first cameras; all factors that came to completely change the perception of distance and time, "bringing" the continents closer together.
The twentieth century was therefore invaded by a new wind, which brought a new reality: speed. The Futurists ideally intended to "burn down museums and libraries" so as to no longer have relations with the past and thus concentrate on the dynamic present; all this, of course, is ideological meaning. Assembly lines cut production times, cars increased every day, streets began to fill with artificial light, this new feeling of future and speed was felt both in the time it took to produce or arrive at a destination, and in the new spaces that could be covered, both in the new possibilities of communication.
In Milan in February 1910 the painters Umberto Boccioni, Carlo Carrà, Giacomo Balla, Gino Severini and Luigi Russolo signed the Manifesto of Futurist Painters and in April of the same year the Technical Manifesto of Futurist painting.
In the posters the technique was exalted and an unlimited faith in progress was declared, the end of the old ideologies was decreed.
The second Futurism was basically divided into two phases; the first went from 1918, two years after the death of Umberto Boccioni, to 1928 and was characterized by a strong link with the post-cubist and constructivist culture, the second instead, from 1929 to 1938, was much more linked to the ideas of surrealism . Many painters including Fillia (Luigi Colombo), Enrico Prampolini, Nicolay Diulgheroff but also Mario Sironi, Ardengo Soffici, Ottone took part in this current - which ended through the so-called "third Futurism", also leading to the epilogue of Futurism itself - Rosai, Carlo Vittorio Testi and his wife Fides Stagni.