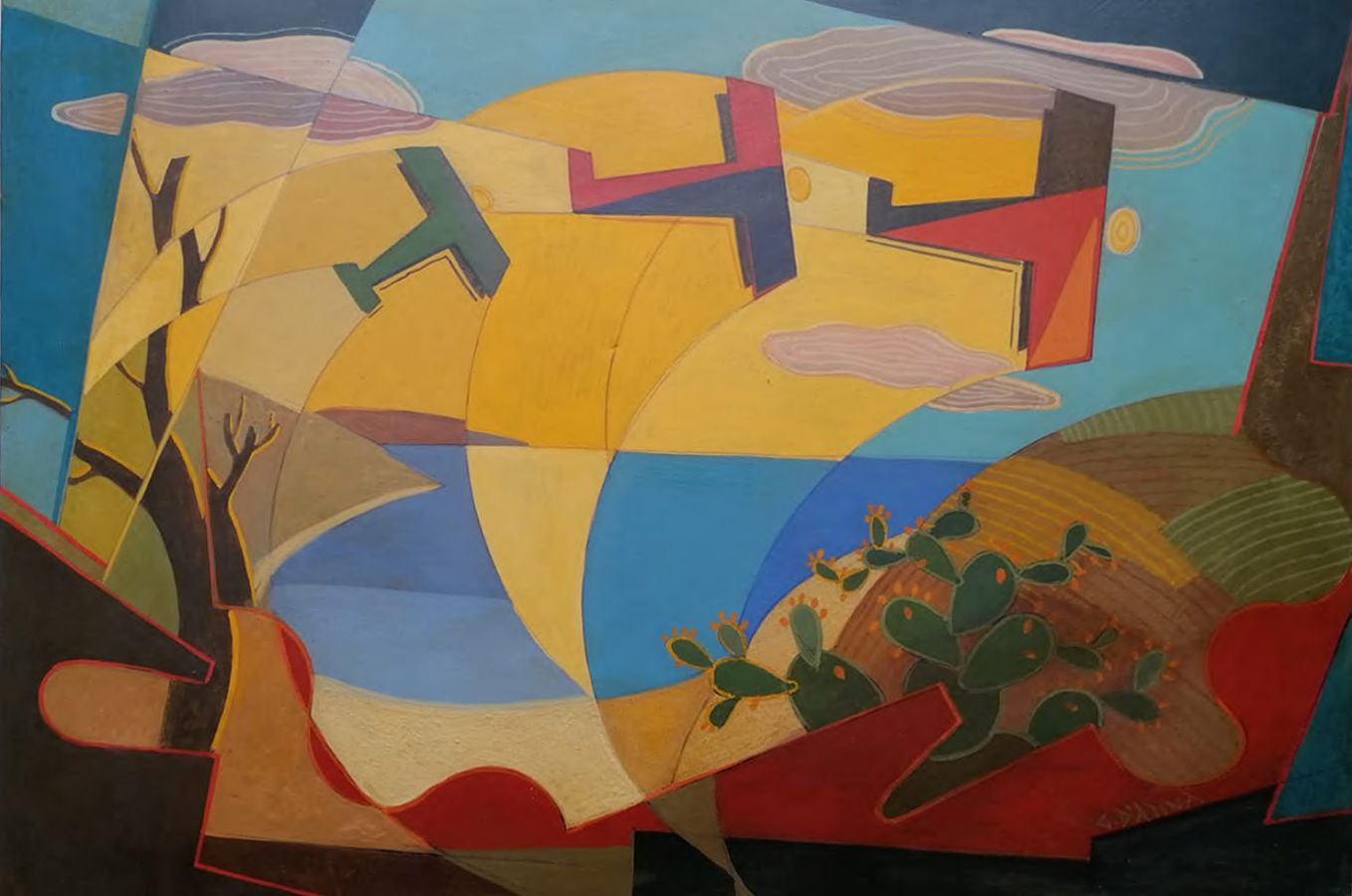 Nowadays, the more we observe and we analize the artowrks of Giulio D’ Anna, (1908-1978), they more they appear rich in significance, with a lot of references to contemporary reality, with pictural techinques which are iconic and innovatives. The collage, for example, it’s insisting in his pictures, with those inserts of everyday cuttings taken from newspapers, mainly sicilian local newspapers, especially “Giornale di Sicilia”, “L’Ora”, who emerge from memory of his palermitan houses and are embroidered in his paintings, attracting the attention of those who look at them (L’Ora del Futurismo, 1931 ca., Stormo aerei Caproni, 1932-’33, Aereo rosso+ paesaggio, 1934).He even remembers of the squealer who, in Palermo, propagandised with loud voice the arrival of the morning papers, and in 1934 he creates a very particular Natura morta, composed by books and pages of the magazines with vivacious and funny advertising inserts, giving birth to Opera pubblicitaria. His artist’ s manner creates also a lot of images for enterprises in Messina and in the near neighborhood- and even beyond (Hopps )-, especially for the citrus businness. Being a young bookseller, he makes also a sort of tribute to his “employers” with a very naif puzzle, but full of meanings, with editors’ portraits (Bompard, Mondadori, the palermitan Tumminelli). Words are a system of communication more understandable, and D’Anna in the first ‘30s was already conscious of what nowadays it seems one of the most disturbing phenomenon of the contemporary times: the news invasion operated by the mainstream medias on the Reason, the foolish assault of characters and words who confuse and often forbid the clean Vision of the Reality.A kaleidoscope of news and images distracts the mind of the contemporary man, and D’Anna uses the collage to put in the right light what turns around him in a frenetic spiral, especially in the 30’s: Mussolini, the colonization, the spectacle, the advertising campaign, but his artist’s hand transforms the negative of the reality in colours of memory, of fantasy, of thoughts.

The collage techniques was known since the explosion of Cubism, in 1912, when we see appearing the papiers collés made by Braque and Picasso. The futurists, naming Boccioni, Carrà, Soffici and Balla, used it a lot: but among them, D’ Anna doesn’t appear, he uses it later and often, with great efficacy, solicited by his memories of his job as bookseller, by his passion for music, and in this way the books and the musical scores with fragments from the newspapers enter fully in his pictorial experience. And now it is time to acknowledge him the importance he deserves in this sector. With the collages, the polymateric ( wired of copper, iron, wood ) urges him to find new linguistical solutions, uniques for the sector, and he is among the fewest in those years to use it with an originality which mades of him a singular artist, well recognizable in the topography of the Futurist Art.