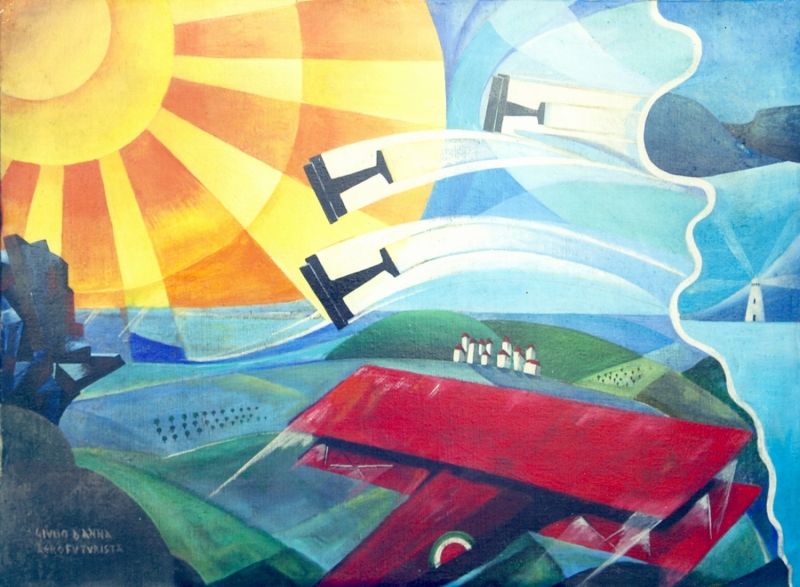 Aerial paiting is his artwork, in which the modernity of the assemblages and the positive components of nature help to make loose to the mechanic elements all of the negative cypher of the industrial civilization through the projection in a solar athmosphere, in landscapes which fuse together, opening different new directions, that exists only in the imaginary, in an effervescent explosion of turnarounds, undulations, straight lines: attracting “ colorful lashings”, as they are called in 1933.

From above, trees, houses, hills, have miniaturistic dimensions with an happy synthesis of forms, colors, matter and volumes, which sometimes has subtle naif underlines and winks at the figural and chromatic lesson of Balla and Depero, but in a conjugation that has all mediterranean taste.Auspicious rainbows frame from above houses, streets, boats in resting, trees, and even the below ruins of the terrible earthquake of 1908 in Messina: D’Anna is much more interested in the rebirth, without disarticulation from Reality.

His, it is a solar landscape, a lyric poem of the landscape, in which earth and sea meet each other and they fight each other, in which very colorful planes, usually in pastel tones, let to explode all the joyous fascination of the Infinite in a mutant polydimensionality of perspectives.And they overfly with audacity the great mouth of the Etna, and even they split in reality in the skies and self- quotation on the easel (Virata su ponte faro, 1933-’34).

In his experimental and lyric rush, Giulio arrives to particular assemblies between the human figure, especially feminine, and plane, with very particular results in the futurist picture.

In this way, his planes are like emblems of the cosmic dyamism, even if they are squared, stylized, and childish, in apparence without mechanical and plastic details which, if we observe with attention, will be shown soon, in this way revealing the knowledge that D’ Anna retains about the peculiar techniques of the single machines.

If we study him from different angles, we discover today his deep culture of every type of aerial- machines of the ‘30s, of which he fixes with the brush the details with a precision that is all new- brand in his pictorial icons, a scientific and mechanical precision.

Among all the planes used by the Italian Air Force, D’ Anna follows the evolutions, the records, with documentary and psychological partecipation, and he still surprises us all.

Maybe, we should remember the years he lived in Palermo, especially when he was in touch with Vittorio Corona, who worked then in the Technical Bureau of the Ducrot Enterprises, of which Caproni was a co- owner, and in which the propellers in wood were produced and seaplanes were assembled, his dears seaplanes; he could, then, see and know different and bran- new types of engines.

He was attracted also by the Savoia Marchetti, the planes with which during the ‘30s the famous flights across the Atlantic were done, and in his painting dedicated to Italo Balbo they become very little forms that grow in dimensions slowly, in a vast arc of sky, until he shows us the clear details that build them.

He even approach the aerial painting of war, not lived but testified to him by his brother, charging of pale and dark colors and of deadly meanings the machine and the landscape.

A part of the italian intellectual world condemned the war, underlyning the horrors, the deaths, the sacrifices, the losses, and had seen in this machine a tool of destruction: D’Anna remains loyal to his imaginary.

Another machine he loved so much, was the (Simultaneità di paesaggio + treno, wonderful for that exit from the gallery and that miniature of the landscape above on the left, Finestra sullo Stretto, Velocità simultanea di treno+aereo, 1934, Paesaggio simultaneo+aereo Caproni+treno, extraordinary for the vastness and coplexity of the represented elements ), linked, I bellieve, to his initial autobiographic experiences, maybe the rememberings of his journey to move from Palermo to Messina.

And there are also a large number of trains which passes through on the Strait of Messina, and the large landscapes of an ever- loved island that he never abandoned.