Nando Stevoli - The Folds of Light 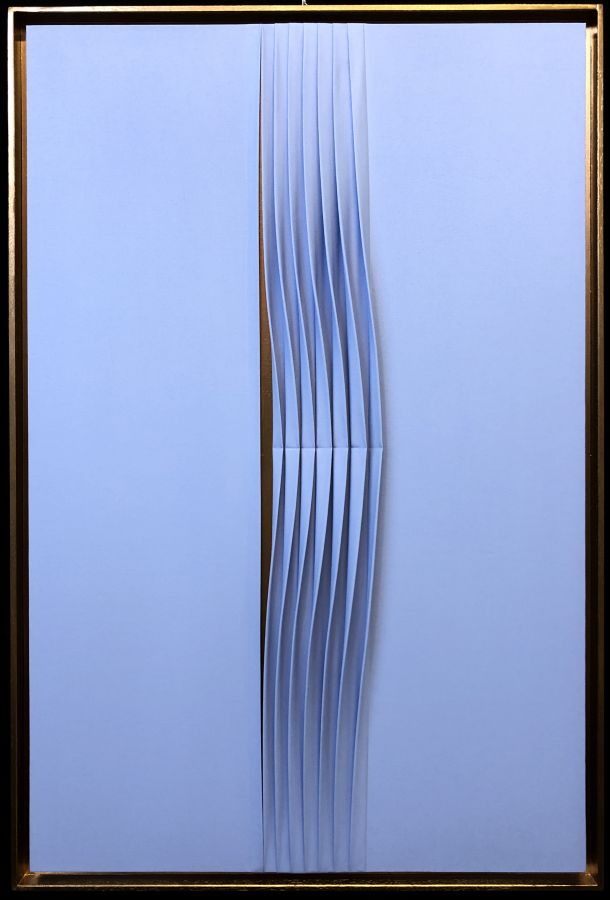 The Folds of Light

The artworks of Nando Stevoli ( Ferrara, 1953 ), codify with an absolute inno- vative technique images which had their origins in the great Milanese season, be- tween the 50s and the 60s, in whom Lucio Fontana and Piero Manzoni remained the unparalleled masters.

The singularity of his artworks consists in not being astract revelations of the mind, but they can be felt as tangibles, stratified in Time, built with anew materic qualities and techniques, in an artistical sense by the intervention of the author.

The folds which originally take form on canvas with a methodic, patient hand- crafted way, can be remind the ripples of the waves, or the wrinkles of the earth, but also the origin of the Japanese origami with her sacred nature or, at the op- posite, the lightness of the plissé soleil, that unmistakable fabric with tight and regular folds which irradiate from the waistline of a skirt.

The Art of Pleating can boast a story of absolute respect, from the Ancient Egypt
to Classical Greece’s female clothes, from whom we derive the inspiration for the famous Delphos tunic, created by Mariano Fortuny and then arisen to style- icon; it was Fortuny it self who patented in 1909 the plissé technique.

In Stevoli’s artwork, this technique becomes Art, a contemporary and absolute one, expressing, through the wise architecture and the extrtaordinary use of the colour ( white included ), an aesthetic in which the development of the form seems to achieve substance under the e spectator’s eyes, offering new creative possibilities and precious materical effects of luminous refraction.

The strength of Stevoli’s images lies not only in their pleasant view, in the likeness of perceiving the sublimation of a touch, but also in the vibration of the light’ s lines, in the blow of metal sword we can find in his most recent artworks, in a sort of musical harmony we can see in the alternance of smooth and striated plains.

The artist starts from the magick of Fontana’s Spatialism to come in the end to unpublished suggestions, all permeated by a tactile sense, exalted by the tones of the whites, the red, the blues, and the blacks.

Stevoli doesn’t forget the story of the creative acts which modified the contemporary art conception, he knew the powerful of ready made of Duchamp, he loves the astonishing gestuality of Pollock, he wants to marry the intellectual purity and the chirurgical precision of the cuts made by Lucio Fontana with the endlessness of the Achromes of Manzoni, he wants to conquer his own iconic manner a poetic model which can go through time and space with the speediness of a fraction and the slowliness of a century.
The contemporary spirit of Stevoli can be ascribed in the present with the signs of the archaic ( from arché, origin ).
And the famous bronzed statue of the “Auriga” of Delfi can be considered, and the already cited Fortuny considered, origin of the plissé the artists gives to the matter and to the Light.